The company that supplies the equipment to power V Festival has created 15 jobs with the opening of its first depot in Bristol, supported by a £2.4m loan from Lloyds Bank Commercial Banking.

The company has used the funding to buy a new site in Portbury, Bristol, establishing its fourth major depot in the UK.

The site has enabled the business to launch its products into the South West and Wales.

John F Hunt Group has a turnover of £100m and its power business operates depots in the West Midlands, Essex, Newcastle and now Bristol. It is expecting to increase the turnover of the specialist power operation by £5m in the next three years.

The group employs more than 400 members of staff after appointing 15 new team members to manage its Bristol operations.

John Hall, group chairman at John F Hunt, said: “As part of our long-term growth plans, we’re expanding from our South East base to now become a nationally recognised business force in the Power Rental market.

“Situated immediately adjacent to the M5 the new site in Bristol is the perfect link between our depots in the South East and the Midlands, making it the ideal location for expansion.”

Gareth Denning, relationship director at Lloyds Bank Commercial Banking, added: “John F Hunt manages a portfolio of 1,450 generators across the country and with the new site in Bristol, this number is only going to grow.” 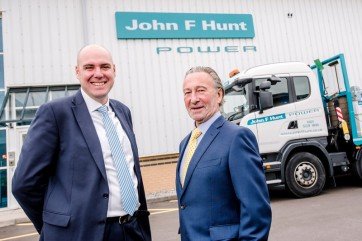