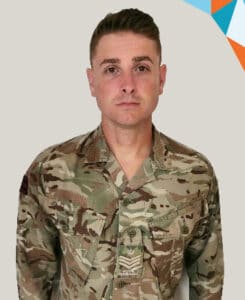 We would like to welcome Royal Military Engineer, Mike Baillie, who commences his placement with John F Hunt on the 2nd Nov 2020.

Mike joined the Army at age 16, enlisting into the Royal Engineers as a Plant Operator Mechanic and completed his training in 2007.

He was deployed on Op TELIC 9 in Iraq and carried out the upgrading of the force protection at Basra Palace by constructing perimeter walls, built sangers from HESCO, compartmentalised accommodation areas and repaired the damage around a POL point containing Petroleum, Oil and Lubricants, following a mortar blast.

He was posted to Northern Ireland in 2008 where he became the Site Commander on a number of construction projects, before going to Op HERRICK 10, in Afghanistan in 2009. Here he carried out the installation of drainage and airfield upgrades, the construction of perimeter walls, entry control points (ECP) and vehicle check points using HESCO.

In BATUK, Kenya Mike spent 8 months as a Fleet Manager and 3 months on a construction project, which involved building formwork, constructing 3 large concrete pads, assisting the surveyors on site and supervising the construction of perimeter walls around the site.

In 2015 as Site Commander and Fleet Manager on Project Anemoi in the Falkland Islands, Mike oversaw the detailed design, resource, project management and construction of 3 accommodation buildings for RAF staff manning the remote radar head stations.

He trained Iraqi Soldiers on armoured plant machinery and taught combat engineering on Op Shader in 2017, before being posted to the Royal School of Military Engineering in 2019 where he began an 18 month Civil Engineering course and graduated in August 2020.

We look forward to having Mike on board when he joins John F Hunt in November!