We continued to excavate the ‘dark earth’ deposits, revealing more of the underlying Roman building. Excavation within the southern room of the building recovered a handful of white and black stone tesserae, suggesting the central part of the floor, which had been removed, had a decorated mosaic. Other finds from this area of the building include several coins and a small annular brooch (Photo 1 and 2). 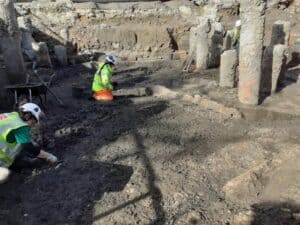 Photo 1 Archaeologists working in the southern room of the Roman building where the floor has been removed. 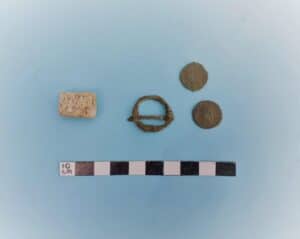 Photo 2 Finds the Roman building. From left to right a white stone tessera and a copper alloy annular brooch, both found in the area of the southern room, and two coins from the ‘dark earth’ deposits overlying the building.

We uncovered part of the mortar floor that might belong to a third room, located to the west and extending towards Redcross Way, as well as the foundation trenches of the external stone walls, the stone having been robbed out at a later date, the building is cut by a number of later features. The northern room is cut by a narrow, east-west aligned linear feature measuring over 10m in length- possibly a ditch or the robber trench of a late Roman masonry wall. The southern part of the building has been truncated by a large, clay-filled feature, roughly east−west aligned, that appears to be a natural water channel. This could relate to the Southwark Street channel, which has been projected to run across the site, close to this location. This is of geoarchaeological and environmental interest as it could suggest the channel were active during the late Roman period.

We completed the excavation of the Roman building and began removing the underlying layers. There is a series of dump deposits that are made of sandy gravel and silt with oyster shells, which have produced a very large quantity of finds, many of which are in good condition. So far, we have recovered a lot of ceramics including jars and dishes, stamped Samian wares, oil lamps- 1 of which is complete, and four gaming counters which have been fashioned out of the bases of pots (Photos 3 and 4). The metal finds include a bronze handle (Photo 5), and several coins. Other finds include a bone sewing needle. These dumps are quite thick, and we expect to recover many more finds from these deposits.

In the eastern part of the trench, we concentrated on removing the burials. We lifted four burials, all of which but one had been truncated by the modern cellars and were partially preserved. This brings the total number of burials from the Phase 2 area to eight. 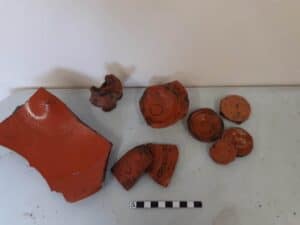 Photo 3 Selection of ceramic finds from the dump deposits below the Roman building, including a stamped Samian ware dish, an unguent bottle and four gaming counters made from pot bases. 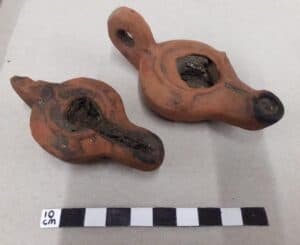 Photo 4 Oil lamps from the early Roman dump deposits with sooty deposits indicating they were used. 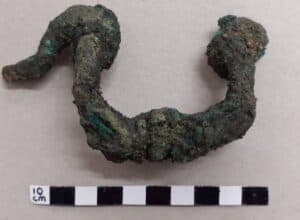