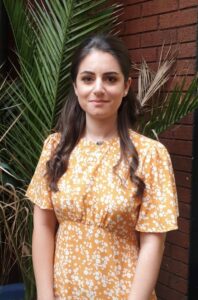 of university. I was placed on a demolition site of a listed building in central London which comprised the redevelopment of an existing seven-story structure built in the 1920s.

The proposed design retained the existing stone and brick façade while the rest of the building was being demolished and redeveloped. The number of steel frames installed and the design of the temporary works on the site amazed me as a student interested in structural engineering and introduced me to temporary design works.

I learnt a lot about the role of structural engineers in designing temporary works to support or protect an existing structure or the permanent works during construction.

After finishing my undergraduate degree in Civil Engineering in May 2021, I joined the John F Hunt Group in June 2021 after meeting Maurizio Desiderati and Joshua Nwokobia at a career fair and became part of the temporary work design team.

In this short period, I have been experiencing real-world projects and put the theory from the university course into practice. Each day is different and provides a new challenge. I have now been fully integrated into the workforce and given all the chances and support I could ask for.

This has already shown me how much knowledge I am going to gain before starting my MSc course in Structural Engineering in October 2021.