‘Birdshot’, which gets its name from spots that develop on the retina in the same pattern as when lead shot is fired from a shotgun; is a rare & potentially blinding disease, for which there is currently no cure.

An impressive 30 teams of four enjoyed the summer sunshine and the testing targets set up by Dylan Williams and his team. After eight stands and two flushes, Top Gun was Tracey Riddington and by default Peter Schwerdt was proclaimed Top Lady! Digby Flower, David Tye, John Rand and Andy Miles under the name of ‘Cushty’ took the team prize, each receiving silver bottle stops, while the ‘Brookfield Multiplex Buccaneers’ were runners up. 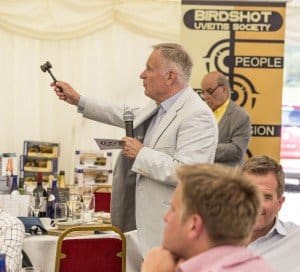 Thanks to the generosity of tJeffrey Archer in full flow1he guns, the cajoling of the auctioneer Lord Archer, the fines, sweep, raffle, heads & tails, and donations, the day raised £65,000! In addition to the research projects already underway, the infra-red light therapy initiative & the creation of the National Birdshot Database launched last year, BUS has been able to fund a Specialist Senior Nurse to focus on all on-going developments and oversee the Bio-Bank resource project; all this being funded by the previous two years Birdshot shoots.

The speaker on the Shoot Day was Alastair Denniston, Consultant Ophthalmologist at the University Hospitals Birmingham NHS Foundation Trust, who was behind the creation of the database & has driven the project forward. BUS has also engaged the expertise of a specialist IT Project Co-ordinator to provide training & support at each participating hospital eye clinic, to ensure standardisation of data collected.

Supporting the infrastructure of the projects may not sound like a very sexy way of spending the money raised, unlike treatment or equipment, however it is absolutely vital for the long term success of our research programme. No-one has any idea how much this research means to those losing their sight and it’s only possible through the generosity of individuals & the organisations who keep on attending our shoot days. From John Hall, Annie Folkard and everyone at Birdshot, we would like to send our most sincere & heart-felt thanks to everyone who supports us! www.birdshot.org.uk 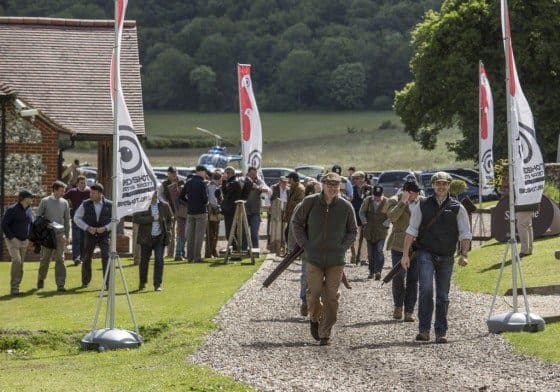